Week 3’s lecture by Manoj Kathpalia got into database design. We continued our referencing to the ANSI/SPARC architecture which it appears will be an ongoing theme. 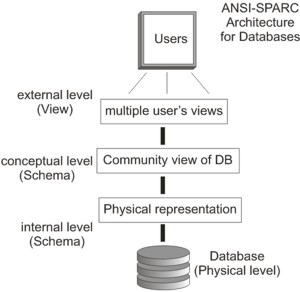 The lecture ran through the Database Design Cycle introducing Requirements Definition, Conceptual Design, Logical Design and Physical Design. With detailed analysis of ER modeling which applies to Conceptual and and Logical Design (which are both at the conceptual level of the ANSI/SPARC architecture).

The ER model is quite a simple graphical modeling tool which we review in the tutorial, it does however seem that there are a number of acceptable notations in ER modeling some of which can be seen here.

Pearl of the week:

Although ER modeling can be used for both Conceptual and Logical Design, the Conceptual Level does not include Foreign Keys and allows Many-to-Many relationships.

Finally we covered an introduction to Database Design Language [DBDL]. We did some more work on DBDL in the tutorial although there were some discrepancies between the lecture example and the tut examples (ie including CK and PK). From the final question of the tutorial, my derived relations in DBDL were as follows:

I did not include CK and PK as they were not included in the lecture’s example.